After South Sudan gained its independence on July 9, 2011 the government in Khartoum began another brutal repression of the Nuba people living in South Kordofan. UN, and other reports, spoke of mass killings of civilians, indiscriminate bombing, burning of churches and persecution of opponents to the Islamist regime led by the dictator Omar al-Bashir. Bashir was under indictment by the ICC for war crimes in Darfur. He was now recreating that genocide in the Nuba Mountains.

This crisis prevented Nuba Water Project from working on water projects in the Nuba Mountains at the time. We turned our attention to the support of the Nuba people trapped in the conflict zone and refugees fleeing across the new border to South Sudan.  Proceeds from the Walk for Sudan provided what survivors  told us were their most essential needs: water, medicine, salt, and soap. 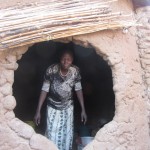 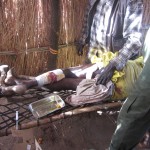 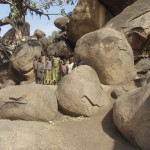 SALT, SOAP, AND MEDICINE DELIVERED TO THE NUBA MOUNTAINS

Overcoming all obstacles, George Tuto, co-founder of Nuba Water Project, successfully delivered almost $20,000 of relief supplies to desperate people in Sudan.  In 2011, a trip that was supposed to take three weeks stretched out to three months, as George wrestled with issues related to supplies, paperwork, transportation, and attacks by the Sudanese government on the people he aimed to help in the Nuba Mountains. This project was followed by another successful delivery in 2013.

Mass demonstrations resulted in the toppling of Bashir in the spring of 2019.  Continued protests finally lead to a three-year power sharing agreement between the military leaders and pro-democracy leaders, with the hopes of an election in the future.  Ground fighting and daily bombings have ceased and peace talks are underway in Juba, South Sudan. Nuba Water Project will continue its work to provide water pump repair kits, Safi Drops, bore hole repair parts, and clean water/sanitation workshops.  If peace is maintained, we hope to expand our efforts in areas that will help with sustainable development.